How much are graduates really earning in 2022?

Gaining a degree require years of hard work and thousands of pounds in university tuition fees, but are graduates getting a good deal once they enter the job market?

We have analysed all of the public information available to find out what the average graduate salary is in the UK in 2022, along with additional information on which subjects or universities are most lucrative, and which regions graduates can earn the biggest starting salaries.

The subject studied at university is an important factor in the starting salary achievable by a graduate.

Below are the average starting salaries for graduates in each subject area, which is further divided into high-skill, medium-skill, and low-skill. These skill levels are defined by HESA and relate to the technical ability involved in the role. For example, in education a low skilled role could be a teaching assistant and a high skilled role could be a head teacher.

The table below shows the average starting graduate salary for every region in the UK. Note that the region indicates where the location where the graduate has gained employment as opposed to the location of the university they studied at.

London tops the starting salary list for graduates with an average starting salary of £28K, whilst Wales offers the least at £22K. However, cost of living differences across region may decrease the purchasing power of some of the higher salaries here.

This could mean that advertised salaries are being inflated, or that in some cases “graduate roles” may also require candidates to have work experience in the job description, which employers are prepared to pay more for.

The university which a student attends can have a huge impact on the starting salary they are able to achieve. This is likely due to a number of factors including the subjects available at each university, the standard of teaching and the reputation a university has amongst employers.

This table shows the top ten universities in the UK with the percentage of graduates who achieved a starting salary of £51,000 or higher.

University College of Estate Management is specialist remote learning institute offering courses in real estate exclusively, which could account for its position in this table. London School of Economics and the remaining universities on the list offer a broader range of course subjects.

The highest paying graduate schemes in the UK sit within finance and banking, and pay more than double the average starting salary for grads.

Below are the top 10 highest paying graduate schemes currently available in the UK.

Careers in the public sector are considered to be safe and secure with many of them offering good financial rewards and job stability over the long term.

These are the 8 highest paying graduate schemes in the public sector.

Male graduates who obtained first-class degree qualifications and entered full time jobs in the UK in 2019 were paid an average of £26,000 compared to women who were paid £24,500 – a 6% difference.

On average, male graduates at the age of 25 earn 5% more than the average female graduate. By age 30, the gender pay gap in annual earnings stands at 25%.

The graph below from StandOut CV shows the portion of graduates and their earnings for men and women. 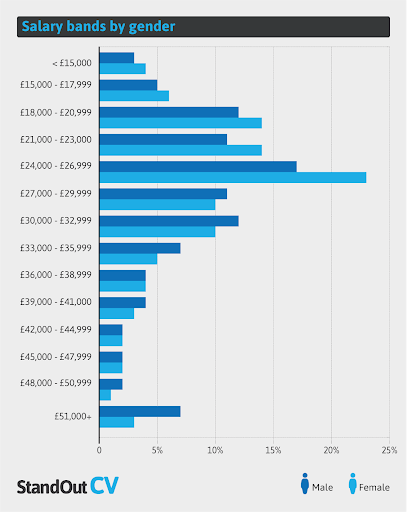 A key takeaway from this graph is that the gender pay increase with higher paid roles, to the point where at the top end of the scale, only 3% of female graduates earn over £51,000 compared to 7% of men.

Chief executive officer (CEO) is the top job available in large organisations and consistently ranks amongst the highest paying jobs in the UK with an average salary of £81,102 and many CEOs earning well in excess of this figure.

Recruitment firm Forward Role analysed over 260,000 LinkedIn profiles to discover which universities and degrees were propelling the most graduates to this sought-after position.

The top 20 universities producing the most CEOs

Which degrees produce the most CEOs?

Data from the Department of education shows median salary for graduates over their entire working career is £34,000 – whereas the median lifetime salary for a non-graduate is £25,000. This means that graduates earn an average of £7,000 per year more than their non-graduate counterparts and this results in a lifetime earnings gap of £321,000.

The cost of university

Whilst a degree is likely to land you a higher paid job, the cost of gaining one is becoming increasingly expensive in the UK.

Tuition fees are the biggest cost a student will have to bear (in addition to living costs) which pay for the key elements of course delivery such as lectures, campus facilities and student support services.

Tuition fees across the UK are as follows and will vary depending on where the student’s home region is:

Most students take out Student Loans to finance their studies which were introduced by the government to make gaining a degree more accessible.

Here are the important numbers around student debt in the UK.

The average outstanding amount of student loan in the UK, split into regions is shown below:

When student loans have to be paid

Student loans do not have to be paid back until the graduate is earning over a threshold set by the government.

Below are the repayment thresholds for each UK region.

In the UK it takes an average of 29 years and 4 months for graduates to pay off their student loans.

According to the UK Government, it is expected that just 25% of undergraduates will repay their full student loan.

According to data released by the Student Loans Company, the total outstanding amount of student debt in the UK surpassed £177 billion in 2021. By 2050 they expect the figure to reach £560 billion.

In the pursuit of gaining a lucrative degree, students will often live away from home for the first time and encounter numerous living costs from rent and utility bills, to takeaway food and nights out socialising.

The average university student shells out £810 per month according to a leading student website’s survey.

Here’s how they are spending that money:

In addition to the above, NatWest’s Student living index unveiled the following facts:

Whilst the average student rent across the UK sits at £421 per month, some towns and cities can cost a lot more.

These are the top 5 most expensive town/cities for student accommodation in the UK.

At the other end of the spectrum, these are the university towns with the 5 lowest student rents.

Cosmopolitan | It takes a depressingly long time to pay off your student loan – https://www.cosmopolitan.com/uk/worklife/campus/a12443209/how-long-uni-students-pay-student-loans/

Statista | Outstanding debt of student loans in the UK 2013-2021 – https://www.statista.com/statistics/376411/uk-outstanding-student-loan-debt/